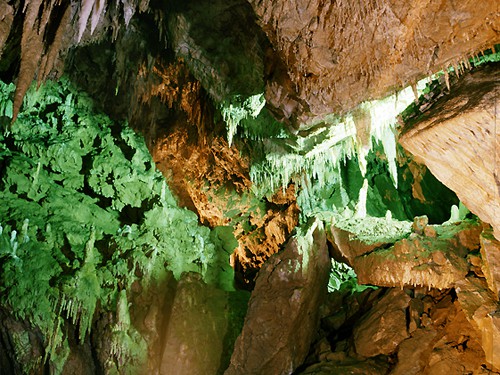 Yagodinska Cave is 20 km south of Devin and 3 km southwest of the village of Yagodina.
It is situated on the right bank of the Buinovska River (the beginning of the Vacha River), which has shaped the longest and most picturesque gorge in Bulgaria - Buinovsko with a length of 7 km.

The cave is reached by the road Devin - Dospat, turning left at the wall of Teshel dam. The road from Teshel to the cave is one-lane and over 35 local buses serve the route.
Temperature in the cave is 6 degrees all year-round, humidity is from 85 to 100 percent- / Wear warm clothes! /

In front of the cave there is a parking lot and a restaurant.

The research of the cave began in 1963 from the Chepelare caving club with head Dimitar Raichev and 8500 meters were investigated. In 1982-1986 the cave was re-mapped and new galleries and sections were discovered, reaching a length of 10500 meters. Its age is determined to be around 275000 years. At 4 meters after the natural entrance of the cave (first level), an Eneolithic dwelling - a local ceramic center, is the only one found in Europe preserved in its natural form. Findings of ceramic vessels, cannons, charcoal, ceramic furnace, chrome (hand mills) were found. The remains date back to the Stone Age (4th millennium BC).  The temperature in this part of the cave is 18 degrees, you can take a look inside in 20 minutes.There is  discourse with separate entrance fee.

With its 10500 meters, the Yagodinska Cave is the third largest cave in Bulgaria and the longest in the Rhodope Mountains. Formed in Proterozoic marbles, it has three main levels and two intermediate ones. The third floor was built in 1971-1982 and the tourist route is 1250 meters. Magnificent and beautiful formations can be seen along the entire tourist route - stalactites, stalagmites, helectites, santro lakes, leopard skin, dendrites, draperies and some of the most unique formations - cave pearls. A total of 22 types of formations of world-famous 28 types.

In the cave there is a ritual hall where civil marriages are concluded.

Different species of bats, cave crickets, spiders, troglobionites and others can be found in the animal world, and flora - lichens, mosses, molds and mushrooms.

Cave house
Located on the first floor of Yagodinska cave. 200 meters to the left of the exit of the cave. It is 200 square meters hall with temperature of 18 degrees,  hall inhabited around the end of the 5th and 4th millennium BC (the Stone Age)